Chance Chess is a set of playing cards, to be used together with a normal chess set. The set consists of 101 cards: several cards of the type: `Play a King', `Play a Pawn', etc., 25 cards of the type `Play any Piece', and one reshuffle card. Players draw a card, and then move the type of piece dictated by the card - if not possible, then the turn is lost. So, if white starts with drawing a `Play a Rook' card, his turn is lost. When one draws: `Play any Piece', any piece may be moved; the reshuffle card means that the deck must be reshuffled.

It seems to me that the mixture of the different types of cards is well thought, and that the `Play any Piece' cards make this game not only a game of pure luck, while the game certainly will fulfill its purpose: give weak chess players a reasonable chance when playing against strong players.

Chance Chess Co. has its own WWW site, where you can find more information on this chess variant, including how to order a set for a very reasonable price.

It is not really a game to play with serious gamers: too much luck is involved here. However, for children that start to learn chess, the game is very nice. I now play it against mine (8 and 6), with the rule that I draw cards, they do not. We slightly modified the rules (to give me a little chance): when I draw a card whose piece I cannot play, I draw another card. When in check, no card has to be drawn (but unlike in the official chance chess, I don't get a second move in the turn).

These pictures were made with the camera of a Silicon Graphics Workstation by Hans Bodlaender. 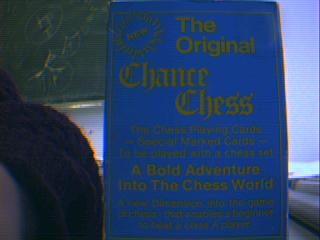 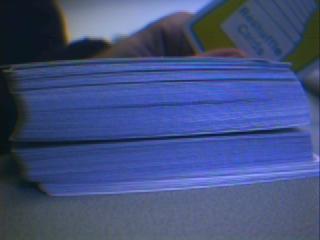 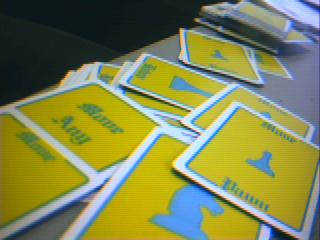 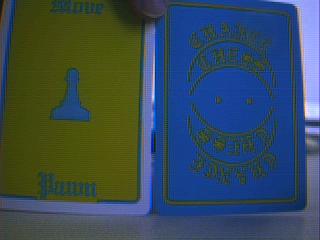 Written by Hans Bodlaender. With thanks to: Chris Giminez from Chance Chess Co. for sending me a complimentary copy of their game. WWW page created: January 22, 1997. Last modified: June 9, 1997. ﻿